Toronto Ontario is Canada's largest city. With close to 7 million people in and around the city, it's one of the largest in North America. While perceived as very safe, how safe is it really? Is it getting more dangerous? Are Torontonians secure at home? What about walking downtown?

These numbers compared to historic numbers are very high. There have indeed been a surge in gun crimes. You can see Toronto Police's gun report HERE.

Gun crimes are up. What about for break and enters?

While these numbers seem high, when compared to US cities the same size they are exceptionally low. So yes, Toronto might be seeing more crime compared to past years, it is still a very safe city. Feel free to walk downtown without worry. Obviously use common sense when appropriate. Make smart decisions and be vigilant whenever necessary. Try to be in groups when possible. Make sure there's good lighting. And try to avoid high risk situations if possible. 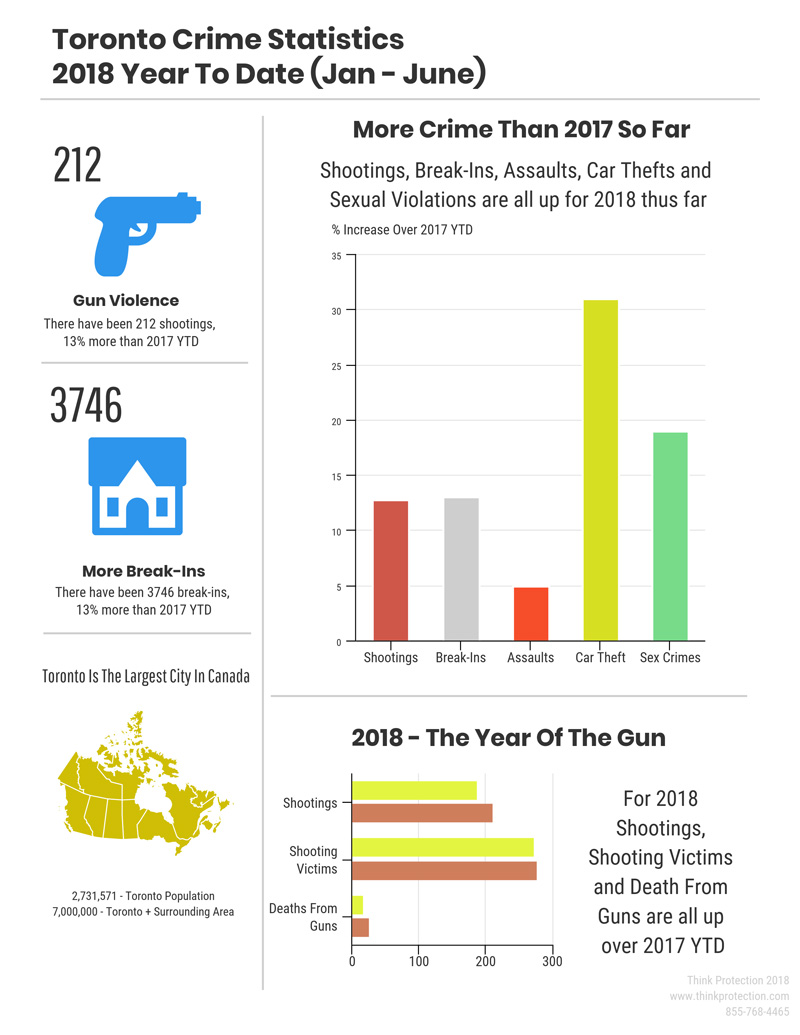 One interesting note is that while most crime statistics are higher this year compared to last, robbery is down 10%. It's unknown why this is.

So how can you feel safer in Toronto? Get a home alarm system. Home alarms work. Houses with alarm systems are three times less likely to have a break-in than those without. A monitored alarm system provides exceptional peace of mind. Lawn signs and decals provide fantastic deterrent value. As does an outdoor security camera.

So whether you're in North York, Scarborough, Etobicoke, Leaside or Forest Hill, a home alarm system will provide increased security. Insurance companies give a discount in rates to homes with monitored alarm systems. Why is this? Because they work! A home alarm with notify you and the alarm company if someone breaks in. The company will then notify Toronto Police, who can respond accordingly. This is fantastic peace of mind. And with prices being so low, there's no reason not to have an alarm system.

Pay As You Go

Pay As You Go